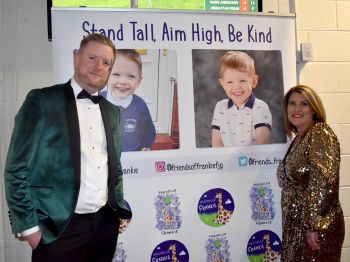 When approached by charity Friends of Frankie, the Carrick team were deeply moved to hear the story of a little boy who died in his sleep at just three years old. Of course there was never any question that promotional material for charity fund raising would be charged for, just a compassion for the sad situation and a desire to help in any way possible.

Frankie passed away in his sleep in May 2019. There was no identifiable reason for the tragedy and so SUDC – Sudden Unexplained Death in Childhood – had another sad statistic. But along the way of what they described as a “very dark road,” Frankie’s parents Sarah and James decided to establish a charity in their three year old’s name. Friends of Frankie

Although a newly formed charity, large amounts have already been raised through donations and fund raising events. Donations have been made to the SUDC Foundation for research and to Alder Hey Bereavement Centre. Sarah and James’s aim is, of course, to help other families in those unimaginable situations.

SUDCs mission is to promote awareness and research into sudden unexpected death in children and is the only organisation worldwide established to advocate for this. All services provided are free of charge of course. The new Alder Hey Bereavement Centre will be the first of its kind when it opens later this year. It will be the first purpose built UK resource to provide an expertly staffed sanctuary for families during such difficult times. It has been called ‘A Place Like No Other.’

All of the fundraising efforts already made and to take place in the future are testimony to Sarah and James, but also a beautiful legacy for Frankie, who will live on helping others.

Make your Halloween party props even spookier with spot varnish

Foamex cut to shape boards for The Brain Tumour Charity